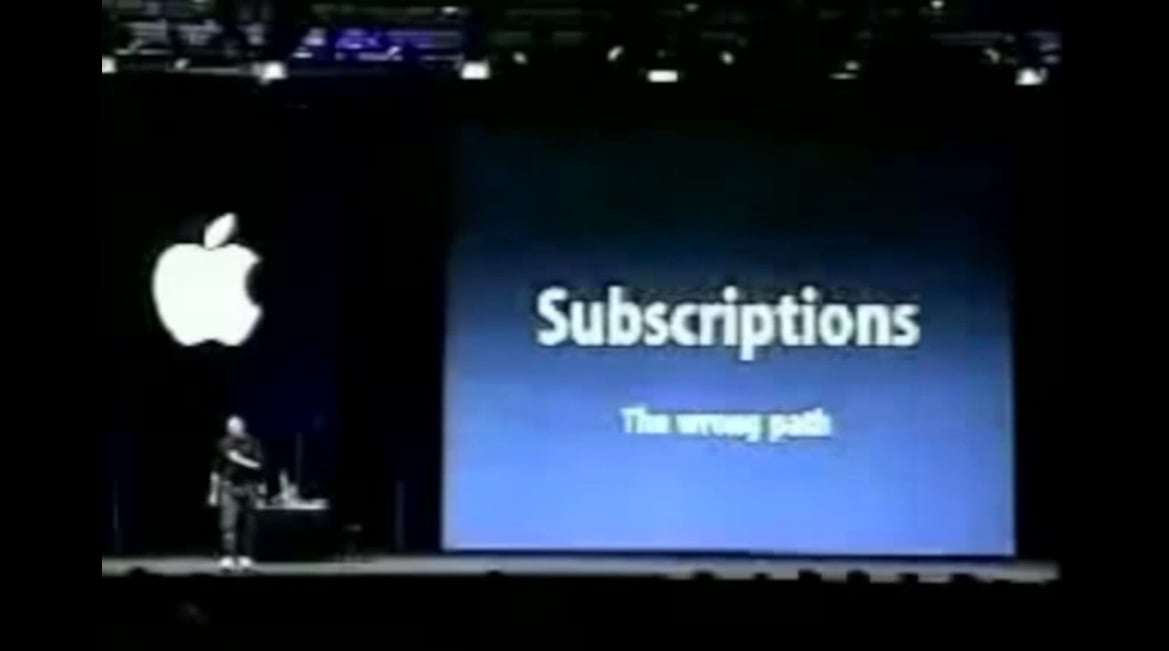 MBW Review gives our take on some of the most important recent happenings in the music industry. Last week’s 2016 revenue numbers for the US got us thinking – and revisiting the Apple king’s infamous words about subscription. The MBW magazine is supported by FUGA.

It’s a scenario that Steve Jobs thought would never materialize.

Streaming platforms in the US market now generate more annual revenue from music than digital music download platforms like iTunes ever did.

According to RIAA data analyzed by Music Business Worldwide, the peak in retail sales of downloads in the US market (including ringtones, music videos, “kiosks” and other digital sales) occurred in 2012, when they exceeded $3 billion at $3.02 billion.

As noted earlier, streaming platforms have generated a lot more than that ($3.93 billion) in 2016, thanks to a 68% increase in revenue year over year.

It is important to note that this $3.93 billion the figure includes $884 million payments from SoundExchange, for streaming discs on “lightweight” digital radio services such as Pandora and SiriusXM.

Even without SoundExchange, streaming revenue from music subscriptions in the United States has reached $2.48 billion in 2016 (including $220 million from “limited tier” services like Amazon Prime Music and Pandora’s $4.99 per month Plus platform).

Additionally, ad-supported streaming platforms such as YouTube, Vevo, and Spotify’s free tier have generated $469 million in the US last year – resulting in a total of on-demand streaming (i.e. without SoundExchange) of $2.95 billion.

This is in fact larger than the total revenue from album and single sales on sites like iTunes in 2012 – the peak year of downloading – which jointly reached $2.83 billion.

(The official total “downloads” figure for that year of $3.02 billion was boosted by $166.9 million in ringtone sales, as well as other niche digital formats.)

It would take a brave analyst to foresee that subscription platforms alone will not be enough $2.83 billion score in 2017.

A brief reminder, then, that Steve Jobs doubted that would ever be the case.

In 2003, he spoke out against the idea of ​​Apple launching a subscription music product.

He told the audience at an Apple event (see below): “People have told us time and time again that they don’t want to rent their music…If it’s costing you $10 a month or over $100 $ per year for a subscription to rent [your favorite] song, [you would have paid] more than $1,000 in subscription fees to listen [your] favorite song in ten years, and it just doesn’t sit well with customers. They don’t want subscriptions.”

When launching iTunes for Windows the same year, he suggested that subscription music was “the wrong way”, ridiculing early streaming subscription services such as Kazaa and PressPlay for “treating you like a criminal”. (Watch from 22m below).

And in a 2003 interview with Rolling Stone, Jobs went further – suggesting that even The Messiah itself would struggle to make a Spotify-like (and, indeed, Apple Music-like) service a success. so broken was the consumer’s proposition.

“The subscription model for buying music is bankrupt,” Jobs said.

“I think you could make the Second Coming available in a subscription model and it might not be successful.”

MBW Review is backed by FUGA, the premium technology partner for content owners and distributors. FUGA is the number one choice for some of the biggest labels, management companies and distributors around the world. With a wide range of services, its adaptable and flexible platform has been built, in collaboration with leading music partners, to provide seamless integration and meet rapidly changing industry requirements. Learn more at www.fuga.comThe music industry around the world

watchOS 9.1 allows you to download Apple Music without recharging