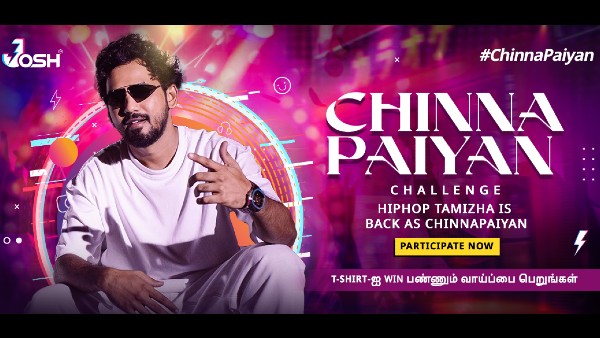 Dailyhunt’s popular short video app, Josh, has hit the ball out of the park with its viral content in different languages ​​and genres. Apart from giving “wings” to upcoming talents to reach for the heavens, the desi app is also known for giving its creators the opportunity to participate in mind-blowing challenges and contests and win big.

Known for their debut album, Hip Hop Tamizhan, which is billed as India’s first Tamil hip hop album, the duo have been creating waves in the music circuit. From independent musicians to film composers, Hiphop Tamizha has come a long way.

On Independence Day this year, they released their new song “Chinna Paiyan” under their Underground Tribe indie music banner on their Hiphop Tamizha YouTube channel. The track revolves around motivating good talent to come forward. The best part of the song is that it features another indie and upcoming artist Vaisagh who is known for songs like ‘Kaaka Kadha’ and ‘En Rant Ah Konjam Kelu’. To date, “Chinna Paiyan” has reached over 500,000 views with over 50,000 likes on YouTube.

To support the new release of Hiphop Tamizha, Josh is hosting a challenge called #chinnapaiyan. The one-week challenge went live from Wednesday, September 7, 2022, where all content creators can support independent artists by creating a video to the song “Chinna Paiyan”.

Winners of the #chinnapaiyan challenge will be rewarded with merchandise signed by Hiphop Tamizha. Sounds cool, doesn’t it?

So what are you guys waiting for? Join the Josh app right away to participate in this exciting campaign.