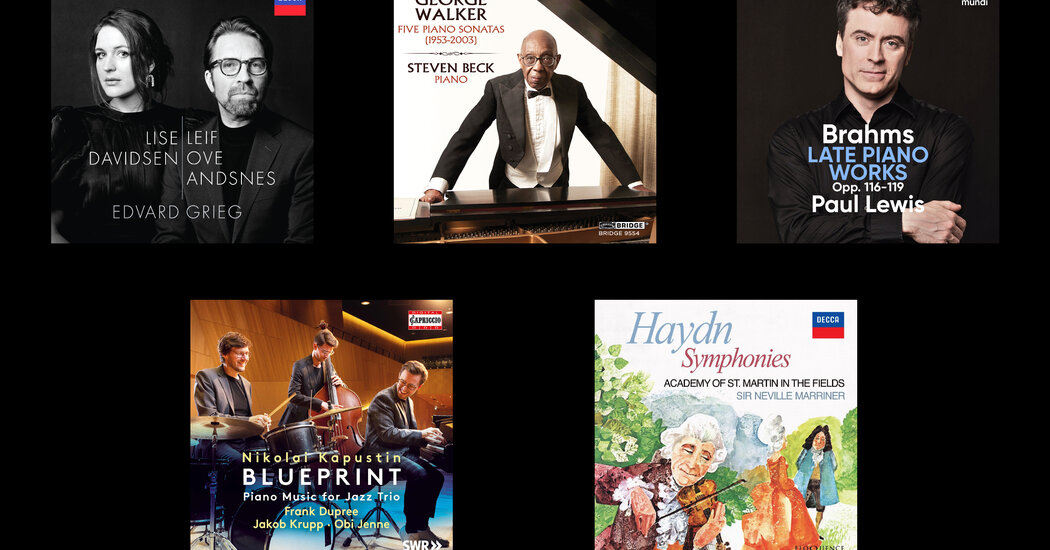 When I reviewed pianist Frank Dupree’s debut album of works by Nikolai Kapustin last year, Dupree previewed things to come. For his follow-up engagement with Kapustin, a Russian swing-influenced composer, Dupree announced that he would release a series of solo piano works performed by a traditional jazz trio.

Now that the results are in, the wisdom of the idea is obvious. Dupree could have recorded a nice solo set, as his feeling for Kapustin is smoother than ever. But there is currently no shortage of solo recitals of this music — notably by Marc-André Hamelin, Steven Osborne and Kapustin himself.

The improvised element on “Blueprint” is subtle. Dupree plays the piano solos as they were notated, and bassist Jakob Krupp follows his left hand. The album’s distinctive improvisational element is left to percussionist Obi Jenne. And it’s his interventions that truly elevate this ensemble. In a piece like Op. 41 Variations, Kapustin passes cheerfully between different syncopated styles; Jenne’s mutable rhythmic juggling highlights every change. Maybe not all of the items here needed the jazz combo treatment. But when the arrangements work — as on excerpts from the Eight Concert Studies — this trio adds a new burst to the material. SETH COLTER WALLS

Listening to the new album by pianist Paul Lewis of the late Brahms, one would think that these pieces were written just after Schubert’s last sonatas, which Lewis recorded with heartbreaking restraint. Bridging the gap between 1828 and the early 1890s, Lewis is a fully classical view of Brahms; these last four sets of solos are rendered with sensible tempos and a clean, calm touch – intelligent and sensitive readings.

The pearly moderation which makes Lewis’s Schubert so moving with humility sometimes distances his Brahms from grandeur and above all from mystery. They are tender and affecting interpretations more than pensive interpretations, and even less disturbing; Lewis dwells on the softer dynamics at times, giving a slight sense of simplicity when you want hints (at least) of the epic. The Intermezzo in E flat (Op. 117, No. 1) does not seem to get lost in the middle section — as it does in Radu Lupu’s 1987 reference recording – so the return to theme is less than overwhelming.

But a lucid intermezzo in A (op. 118, no. 2) is deeply satisfying; the Intermezzo in E minor (Op. 119, No. 2) softens lucidity with reverie. And Lewis’ brilliance in the middle of the Romanze in F (op. 118, no. 5) restores the passage to a sense of sobriety at the end with quietly immense power. ZACHARY WOOLFE

The recording industry has finally found a way to capture Lise Davidsen. A luminous soprano of remarkable range, equally capable of the power of a searchlight and the piercing smallness of a laser pointer, she was not well represented on her first two albums for Decca, which were records of sensitive and intelligent interpretation more than versatility or resounding power.

Now, after programs by Wagner, Strauss, Beethoven and Verdi, comes a much more intimate album of Grieg songs performed with pianist Leif Ove Andsnes – a duet of two excellent Norwegian musicians in works by their country’s most treasured composer . The breadth of this program is better suited than Davidsen’s previous albums to convey the dexterity of his voice and his gift for endearing lightness; there are playful turns of phrase here that you just don’t get in “Tannhäuser”.

Throughout the album – which begins with the eight-song cycle “The Mountain Maid” and continues with excerpts from other collections – Andsnes is a painter of evocative tone, with dreamy glissandos in “Singing”, a galloping festivity in “Midsummer Eve” and flowing momentum. in “A boat rocks on the waves”. And Davidsen is a nimble storyteller, affectionately warm in the opening cycle’s ‘Meeting’, then heartbreaking in its Schubertian finale, ‘At the Gjaetle Brook’, and later bringing both folksy levity and Wagnerian weight to the six-song collection. ‘op. 48. To Grieg and these artists’ credit, you’ll never be so moved by a song called “Snail, Snail!” JOSHUA BARONE

It’s easy now to be a little sniffy about Neville Marriner’s accomplishments with the Academy of St. Martin in the Fields, a partnership credited as the most recorded in history. With the success of the period instrument movement, their hundreds of modern instrument recordings have earned a reputation for being a little stuffy – practical and reliable, yes, but nonetheless dusty relics of an era that is better to forget.

But it’s very nice Set of 15 discs — which brings together for the first time 33 Haydn symphonies composed between 1970 and 1990 — is ample reminder that there were very good artistic reasons why Marriner and his chamber orchestra forces enjoyed such commercial success.

Initially seeing their work as a clean, elegant retort to an older, more solid approach to baroque and classical repertoire, they played this music with an insatiable collective commitment – the slow movements singing with grace, the outer movements sparkling in their dynamism and their invention. While there is a little more zest in their accounts of Haydn’s early symphonies than their later ones, they are all brilliantly judged and full of life. DAVID ALLEN

In 2018, when composer and pianist George Walker died at 96, there were many accomplishments to commemorate, including his Pulitzer Prize – the first awarded to a black composer. But there was also a disheartening acknowledgment of a missed opportunity, given that so few elite classical institutions had seriously engaged with Walker’s work during his lifetime.

The inattention extended to the recordings; there remains a notable dearth of sets devoted exclusively to Walker. A very partial repair comes in the form of this new album, in which Steven Beck covers Walker’s five piano sonatas, written between 1953 and 2003.

The first sonata, revised in 1991, offers some of the galloping energy apparently required to suggest Americana, but it also includes an exuberant harmonic edge that bristles with a nonconformist spirit. By the time of the Third Sonata, written in 1975 and revised in 1996, atonality took center stage. But Walker’s signature flair for contrast – including the alternations between resonating patterns and outbursts of peremptory chords – is still evident. With a play that is by turns sharp and sensitive, Beck’s recital accentuates the failings of a protean artistic life. SETH COLTER WALLS